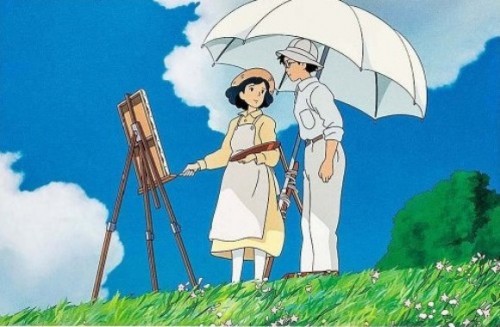 So this is it: Miyazaki’s swan song. He brings together his great passion for airplanes with a recurrent Studio Ghibli’s theme: the pursuit of one’s dream. At odds with all his previous works, this film is an animated feature more for adults than children, being the biopic of Jiro Horikoshi, a Japanese aircraft engineer who developed the Zero (fighter plane used during World War II). Although it starts with a boy and his imagination, whose dream of becoming a pilot is impeded by his myopia, it evolves into a more serious and grounded story of a young man determined to become an aircraft engineer, who, in turns, matures into a talented designer of fighter planes. Miyazaki still delights us with his magic, giving it free reins representing Jiro’s dreams and a great character, Caproni, an Italian aeronautical engineer who appears as mentor and adviser in the dreams. On the other hand, the film also shows, very effectively, dramatic events such as the earthquake and the subsequent tsunami and firestorms that devastated the Kanto region and nearly destroyed Tokio in 1923. It is during this fateful day that Jiro, still a student at the time, crosses path for the first time with Nohoko, the girl who will become his wife years later. Miyazaki, while telling his hero’s story, only hints at the major historical events: Japan’s poverty, its race to armament (along with Germany), the rises of totalitarian governments, repression of dissent and war. It seems that the story, as well as Jiro, lives in a bubble and focuses only on making the best plane ever without really dealing with what it’s being built for. This is the major flaw of the movie and it is the drawback of telling a story grounded in reality when the author is so used to fantastic ones. The uses of planes for war is, indeed, briefly addressed and condemned but it feels like an afterthought, like Miyazaki realises too late that he cannot avoid making a statement. Anyway the film is still a pleasure to watch with its flawless animation and endearing characters. Miyazaki leaves us with a bittersweet ending, reminding us that the dream is over and it is time to wake up. Le vent se lève il faut tenter de vivre. —7.5/10

Filed under Animation, Seen at the cinema

Family drama in modern Japan: Ryota and Midori, a well-to-do couple, discovers after six years that their son has been swapped at birth with someone else’s. We follow the slowly unfolding of events from the first meeting with the other couple, who owns a small hardware store, to spending time with the other child and getting to know him and his family. It is interesting to see the very different interaction of the fathers with their sons and between the families, the viewer can appreciate cultural nuances and rich subtext due to the dissimilar social background. The film focuses in particular on Ryota, who is rather distant and strict as a father, more worried about making his sweet, mellow son stronger and independent, to prepare him for the future, than to actually spend time with him. When he finds out that his child is not biologically related to him, he starts to question everything about his son and to yearn for one more like him. It is a journey of introspection for Ryota, he struggles with his own daddy issues and tries to decide what is the best way to resolve the situation. The good performances of all the cast and the sure hand at the helm make the film absorbing and touching. —8/10

Historical film, or at least based on true events, about the American occupation of Japan right after the end of World War II and how they dealt with its emperor, Hirohito. General Fellers (Fox) is tasked by General MacArthur (Jones) to investigate and determine if Hirohito is a war criminal and should be executed as such. His job is facilitated by his knowledge of the Japanese culture, due to his love affair with Aya, a woman Fellers met in college and than stayed with in Japan before the war. However he seems more focused, at times, on his frantic search of Aya, hoping against hope she survived the destruction caused by the war. We get glimpses of political maneuvering on both American and Japanese side, which would have made a more intriguing plot if developed, but mostly we are drowned in the self-righteousness of the protagonist, which is uninteresting and stale. Fox does his best and he is a good fit for the character, Jones brings his usual energy to his performance but it is not enough to save the film. Insipid —5/10