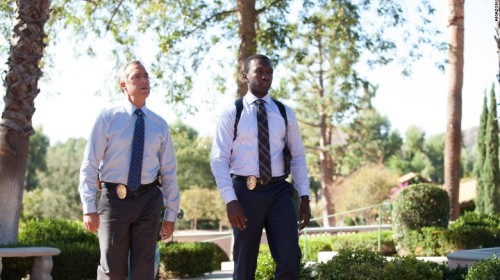 I’ve decided to watch Bosch because of Titus Welliver, finally someone had the guts to give him a chance as lead actor after decades of solid work as character actor in many TV-shows  and a few films (most viewers will remember him as “the man in black” from Lost but to me he will always be War, the horseman, from Supernatural and Jimmy O from Sons of Anarchy). The show is co-created and co-written by Michael Connelly, based on his successful (apparently) series of books. I’ve never read the books so I cannot judge on the quality of the source material but the on-screen version works well, with a vibe halfway  between Southland and a Michael Mann’s movie.  Set in Los Angeles, Harry Bosch is a homicide detective in the Hollywood division with a reputation for being tough, not following the rules but always getting the job done (seriously?!?). In addition our hero has a tormented past (war vet and traumatic childhood), a difficult love life, he’s a loner, a workaholic and a distant father. What can I say: all the boxes for the most used cliches about detectives are checked so let’s move on, nothing new here. What really works is Welliver’s performance, he makes the character believable and, as a viewer, you can’t help but root for him. It also doesn’t hurt to have two The Wire alumni among the main cast: Jamie Hector as Jerry Edgar, Bosch’s partner, Lance Reddick as Deputy Chief Irving. Both actors do their best but, unfortunately, their characters have little depth and are mostly one-dimensional. Fans of The Wire might cringe a bit thinking that Lt. Daniels has metamorphosed into Deputy Rawls, all politics and no real police work, but hey that’s life (if you have not seen The Wire, you should definitely do that before even thinking of watching Bosch!). Amy Aquino is Bosch’s direct superior, Lt. Billets, smart, tenacious but also a good friend. Luckily she has a more well-rounded role and it’s a fair depiction of a woman in a tough line of work. Same goes for Wershing’s rookie cop: pushy and go getter, who champs at the bit and can’t wait to be a detective. She also happens to be Bosch’s love interest that, naturally, will complicate his life even more. The two intertwined story lines of a cold case and a serial killer on a rampage keep you interested and mildly invested and I liked the photography and some of the directing choices. So all in all a honest, quality cop show without thrills or innovative approach. Reliable —6/10