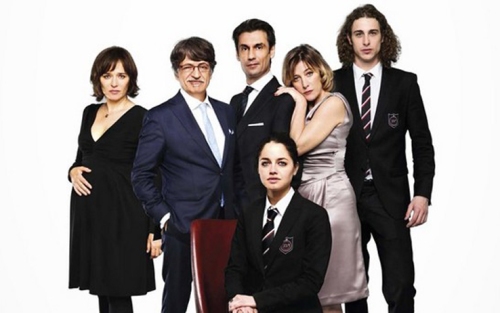 Stark and unapologetic portrayal of Italian middle and upper class through the story of two families: the Ossola and the Bernaschi, their fortunes collide after a terrible accident on a night before Christmas. The film has a Rashomon’s structure with: a short prologue showing a cyclist being run off the road by a dark SUV late at night, the previous six months leading to the night in question told by the point of view of three characters and an epilogue. Firstly the audience meets Dino Ossola (Bentivoglio), he is a small time real estate agent, his business is in crisis but he wants to make the big bucks no matter what. As it happens his teenager daughter Serena (Gioli) and Massimiliano Bernaschi (Pinelli) both attends a posh private school and are dating, perfect way for Dino to insinuate himself into the life of powerful financial banker Giovanni Bernaschi (Gifuni) and get involved in high risk but highly rewarding investments. He lies and cheats to try and get what he wants, not caring that he’s risking his children’s future. As time goes by and the financial crisis tightens its grip, things start to look grim for Dino and the ones closest to him are none the wiser: his second wife is too involved with her work as psychologist for troubled kids and his daughter has her own problems to deal with. Cue to Carla Bernaschi (Bruni Tedeschi), once an actress, she married up and lives now a cushy life among the well-to-dos, busing herself with shopping. Her life seems rather aimless until she finds a new interest: save the local theatre from being converted into condos. After getting the money from her husband, she organises the renovation and put together an artistic committee that will manage the activities of the theatre. Carla pours herself into the work and makes a tight connection with Donato (Lo Cascio) since Giovanni is too busy and worried about his business and her son too self-absorbed. The last charter is Serena’s point of view, it sheds light on a few tricky details of the story and makes it all clear about what really happens the night of the accident. I don’t want to give away the ending so I’ll just say that she ends up being the strongest character, more determined and selfless than the rest. Although adapted from a an American novel, Paolo Virzi manages to give a scary picture of the opulent and self-serving upper-middle class that lives in the small towns north of Milan, with a sharp eyes for details and social nuances. The film keeps the viewer engaged and interested to the very end, however it does leave a bitter aftertaste and a gloomy outlook of Italy nowadays, perfectly exemplified by Carla’s last line: “You bet on the downfall of this country and you won”. The cast is spectacular: from Fabrizio Bentivoglio’s rendering of Dino, unctuous, mellifluous and down right repellent to Valeria Bruni Tedeschi’s pitch perfect interpretation of Carla, so lackadaisical and passive but ready to do what is necessary even if it’s despicable. Special mention to Matilde Gioli, her Serena is impressive and very relatable. Provocative and compelling —9/10