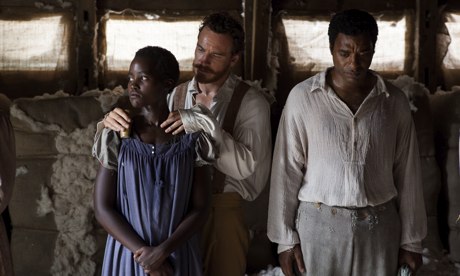 Steve McQueen likes to deal with complex material. After Shame, he decided to “lighten up” by telling the story of Solomon Northup, a free-born african-american from Saratoga NY, who was kidnapped in 1841 and sold as a slave. As you can guess from the title, after years of tribulation and pain, he manages to get back to his family. Chiwetel Ejiofor as Solomon is intense and carries the film on his shoulder, aided by a very strong supporting cast: Paul Giamatti as slave dealer, Paul Dano as creepy, vengeful carpenter (is it my impression or does he seem to play more and more creepy characters lately?), Benedict Cumberbatch as the sympathetic and kind master, Michael Fassbander as the harsh and unforgiving master and Lupita Nyong’o as prized slave. Good acting notwithstanding, the pace of the film is uneven, it tells the beginning of the story as a flashback but the director can’t wait to get to the cotton fields and the lashing. There are also the long scenes to drive home the brutality and the hopelessness of Solomon’s situation, which are quite effective but still feel a bit disjointed from the narrative. On top of all this we have the villain, master Ebbs (Fassbender) who is cruel, unrelenting, possessive and utterly controlling… basically there is not a speck of decent human qualities in him, and this is what really makes me lose interest in the story: it’s too black and white (pun intended!), too linear and uncomplicated, it seems such an easy solution to paint all the slavers black, even the supposedly “good” master (well… except the carpenter who helps Solomon but he doesn’t count being Canadian).  I understand, the film is based on Solomon’s view so we do see the world through his eyes but it left me a little detached and I’m sure that’s not what McQueen was going for, especially considering how emotionally taxing and absorbing was Shame. I was expecting much more —7/10 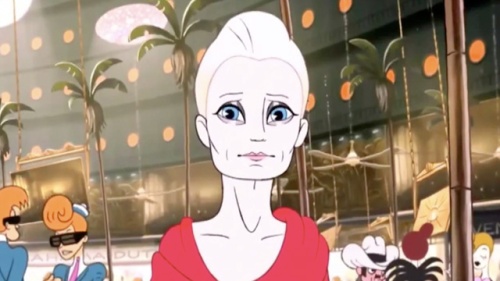 Robin Wright, who is growing old and whose star is fading, receives a final offer from her movie studio (miramount, really?!): being “digitalized” and stopping performing for an audience. She accepts in order to care for her younger son, who is becoming deaf and blind.  Fast-forward to 20 years in the future, Robin is going to the titular Congress in toontown to re-negotiate her contract, and here the bad acid trip starts. The animation is “vintage”, reminding of Steamboat Willie and Betty Boop, and the story progresses a tad too slowly. Folman uses Lem’s idea of a chemical compound that once taken allows one to be whoever/whatever, wherever one wants to be. The final twist reveals a dystopian reality that could have been explored more in depth. Interesting premise but it doesn’t deliver — 6/10

Filed under Animation, Seen at the cinema