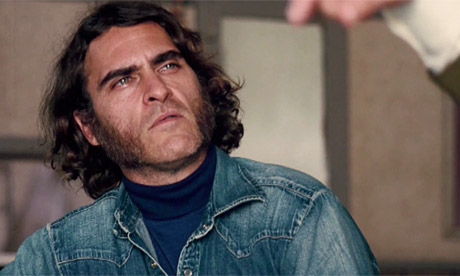 The lastest film by Paul T. Anderson is somehow a crossover between The Big Lebowski and Chinatown.  This slightly surreal and meandering story starts like a classic noir: an ex-flame comes back into Doc Sportello’s (Phoenix) life asking for help. Our hero is a private detective with glorious sideburns and a penchant for smoking pot. His ex, Shasta (Waterston), once a flower child with the same proclivities, has since moved on to greener pasture: her current lover is a real estate magnate.  After her cryptic visit, Shasta disappears and Doc begins a strange journey following weird clues, stumbling on the kidnapping of said magnate, searching for a phantom ship and dealing with all sorts of crazies. He’s helped by faithful friend and lawyer Sauncho (Del Toro), deputy district attorney and occasional lover Penny (Whiterspoon) and he ends up making common cause with Dirty-Harry like detective Bigfoot Bjornsen (Brolin). Set in 1970, this strange and rather convoluted tale, based on the eponymous book by Thomas Pynchon, might be slow-burning and very unlike Anderson’s previous film (The Master) but it’s captivating to follow. Doc is an oddball character and, most of the time, he’s stoned but, improbable as it may seem, he’s also pretty good at his job. In addition there’s Bigfoot, he starts out as a “benevolent nemesis” or “evil guardian angel” to Doc, but he reaches an understanding with him after their investigations  cross path. In a way, Bigfoot has similar traits to Doc: loner, determined and capable (with a visceral hate for hippies but that’s just a colorful side of his persona). This film with its eerie atmosphere and intricate plot turns out to be more  a character study on acid and it really works due to the superb performances of Phoenix and Brolin. Anderson has managed again the difficult task of keeping the viewer engaged with a star-studded, 2.5 hour-long movie based on a pretty wacky premise: chapeau! The cast in general is rather spectacular: curious, unexpected cameos and intriguing portrayals, it is clear that there’s a sure hand at the helm. The soundtrack and the photography complement the story and contribute greatly to the bizarre feeling that pervades the film throughout. Anderson’s style might not be everyone’s cup of tea and this film is even stranger than his usual fare so consider yourself warned. Mesmerizing –9/10