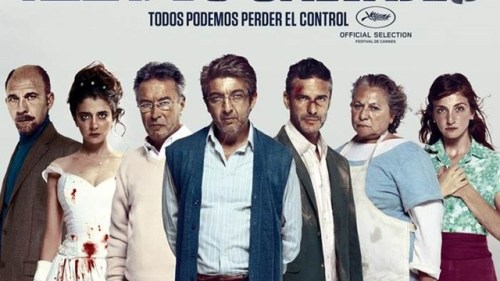 Damian Szifron wrote and directed this multi-segmented film that explores the dark and wild side of human nature. Each of the six episodes starts from a very simple premise: a plane trip, a new customer at a truck-stop restaurant, an overtaking on the motorway,  a car towed away, a hit-and-run accident and a wedding celebration; each story however evolves into something far more extreme than usual with a morbid humour and, in a few cases, very grim endings. The common denominator is always the loss of control, the refusal to be logical or sensible while facing the facts and just giving in to a more visceral and primal reaction. The first two stories are strictly about vengeance: long and carefully planned like the count of Montecristo or more in the spur of the moment like Beatrice Kiddo in Kill Bill (and equally bloody); both episodes are told with a slow pace and a mounting sense of foreboding. The fourth and fifth tales are more about “the insolence of office, and the spurns
that patient merit of th’ unworthy takes“, the former taking a very extreme turn reminding me of Michael Douglas’s character in Falling Down. The third and the sixth episodes are centered on what can happen if you cross the wrong person and how things might escalate (very quickly!) into violence. It is not a surprise that Pedro Almodovar is the producer since the mood and the flair of this film strongly remind of his early dark comedies (e.g.¡Átame!), he probably recognised the genius and the potential of these grim but very entertaining  parables. The whole cast is quite brilliant but a special mention should go to Erica Rivas for her role as deranged bride. I must say that when the film ended I was surprised, I would have watched at least another hour of these tales of ordinary folly. Impressive and riveting. —8.5/10