Favorite quote of the moment

Filed under Favorite quotes of the moment, Odds and ends 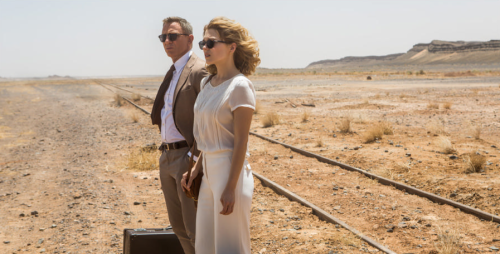 Sam Mendes as director, Christoph Waltz as main villain, Daniel Craig finally owing the role as 007, after good performances in Skyfall and Casino Royal, at least one age-appropriate Bond-girl (Bellucci)… this film had all the ingredients for being a worthy new chapter in the suave spy’s history. Alas, it doesn’t deliver on all its promises. To begin at the beginning: the title sequence with Sam Smith’s song is neither remarkable nor particularly memorable, so no, not a good start (it was difficult to top Skyfall, I know). Our hero is on a mission from M (the deceased one, not the current one) but he doesn’t really know what he’s chasing or looking for. The not-so-greving widow (the above mentioned Bellucci) of the man Bond most recently killed points him to a secret meeting of a secret organisation… and I was waiting for someone to say “Hail Hydra!”… I’m too jaded I guess for a serious take on an all powerful, worldwide criminal syndicate. It did work well in the sixties when the franchise started but now, after so many homages and parodies (I’m looking at you Austin Powers!), I think it lost its aura of menace and uncomprehending evil. Blofeld is not truly convincing as psychopathic megalomaniac, Waltz’s valid efforts notwithstanding, and makes the whole story a little flat. While our globetrotting spy is involved in all the classic Bond-action scenes — foot and car chases in cities,  beating up henchmen, saving the damsel in distress and gathering intelligence — on the home front M (Fiennes), Q (Benshaw) and Moneypenny (Harris) are fighting the ugly face of progress, personified by C (Scott), who wants to bring the British intelligence into the 21st century. Of course, we know from the get go that there’s more to it and it helps bringing the plot full circle in the third act of the film but…really! Demonising the digitalisation process it’s a bit old… Sarah Connor told us decades ago. Anyway, I’ve been very negative so far, so here’s the good part: the  cinematography is spectacular, the action is quite breathtaking and the cat-and-mouse chase during the Day of the Dead parade in Mexico City is amazing. All actors give solid performances and the story moves along smoothly, Mendes, after all, knows his job. Maybe my expectations were too high and I felt let down, only time will tell. Spectre wants to be sinister and serious but lacks the more raw and grim elements of Skyfall to be as good as the latter. Unsatisfactory –5.5/10

Far better than the last installment of the 007 series but that does not really say much. It brings back a little humor with tongue in cheek references to the golden era of James Bond. Our favorite spy is a little worse for wear due to his hobby and his beloved country is under attack. The villain du jour has a personal grudge and a penchant for computers… he even outwits the new Q (brilliant Ben Whishaw)! But his thirst for vengeance has the better of him and he goes overboard, so our hero saves the day. As action goes the film really delivers and the cinematography is pretty spectacular. Judi Dench is always impeccable as M and Daniel Craig can fight like a pro and wear a Tom Ford suit with style (still, he is not my favorite 007). I’ve enjoyed very much Albert Finney’s part: cantankerous and ironic. All in all, a quality Bond movie. —6.5/10