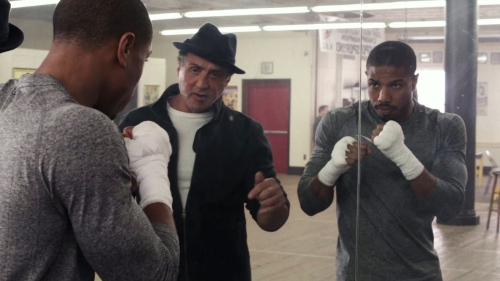 This film has been accused of retreading a very familiar story line and of being chock-full of sport movie cliches but, in the capable hands of two rising stars, Ryan Coogler as director and Michael B. Jordan as leading man, it manages to breath fresh air into a very stale franchise. I confess I didn’t watch past Rocky IV, maybe few bits and pieces of Rocky V. Anyway I was pleasantly surprised and moderately nostalgic watching this “sequel”.

Adonis “Donnie” Johnson (Jordan) is the illegitimate son of boxing legend Apollo Creed (really? Adonis son of Apollo? For real? Not even a tongue in cheek quip about it? Ok, then, moving on). He has never known his father and has had a troubled childhood after losing his mother. However his luck changes when Mary Anne (Rashad), Apollo’s widow, tracks him down and takes him in (what would you expect from Mrs. Huxtable?). Fast-forward a decade or so and we see Donnie with a nice job, after growing up in a beautiful home and receiving a good education. Unfortunately, he feels unsatisfied and meant for something different, the shadow of his famous father looming larger and larger, spurring him towards professional boxing.

The second and third act roll out as expected. The underdog (Donnie, not Rocky) fights against all odds figuratively and literally to prove that he’s not just a name but also he has what it takes to be a champion. After being told that he shouldn’t be a professional boxer by his stepmother and by Tony Jr. (Wood Harris), who is a trainer and a family friend, Donnie moves to Philadelphia to seek the help of another legend: Rocky Balboa. It will take some convincing but Rocky eventually accepts to be Donnie’s Mickey and the tale comes back full circle. We do get the training montage with a run through the streets of Philly, it’s a bit corny but strikes the right note with a combination of energy and nostalgia without outdoing it. The fighting scenes are more Raging Bull style than the original Rocky, there are less slow motion sequences and the viewer feels right in the middle of the ring. Even the romance between Donnie and Bianca (Thompson) is not too trite and it helps explore more Donnie as a character. Unfortunately that not the case for Bianca as per Hollywood standards, a well rounded portrayal of a woman is still too tricky!

The acting is what really works to the advantage of this film. Jordan is very convincing and he has a good chemistry with Stallone. The latter gives a nuances and touching portrayal of the old champ, a little worse for wear but with still some sparks in him. Coogler succeeds in offering a new perspective on a worn out story and making it enjoyable and involving.