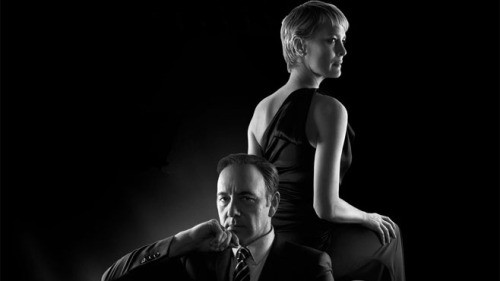 I have read reviews in which Frank and Claire Underwood have often been compared to Lord and Lady Macbeth but I don’t think it is enough for this second season: the Macbeths are rank amateurs! The Underwoods are more “thy mother mated with a scorpion” kind of people. Unlike season 1 (here is my review, in case you were curious), this time around their end game is very clear from the start, which takes, a little bit, the fun out of watching Frank and Claire move the pieces on the chessboard. Frank utters in the second episode what should be the tag line of this brand new 13-parts story: “Democracy is so overrated!”. He also delights the audience with his personal version of Cersei Lannister’s “when you play the game of thrones you win or you die, there is no middle ground”, in his first breaking-the-fourth-wall monologue. After swearing in as United State Vice President and moving his “war room” to the White House, we see Frank still trying to work both fronts: loyal supporter of the President and eminence grise of the Capitol. Although the writers manage to ambush the audience with a couple of sudden twists and give us scheming and backstabbing, there are also scenes that seem a little out of character for both Claire and Frank, and the “nosy journalist” plot line is resolved hastily and it feels swept under the rug, which diminishes somewhat the overall good quality of the script. This aside, the season is rather enjoyable with an excellent cast (Spacey is superb) and strong, capable directors for each episode. Crafty —8/10