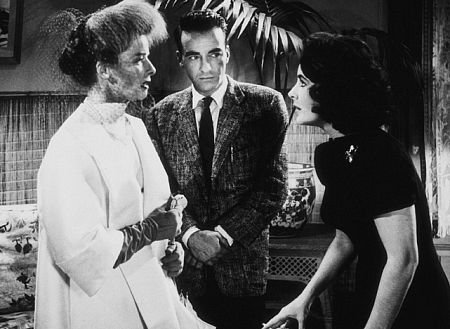 Doctor Cukrowicz (Clift) is a young and capable neurosurgeon, recently arrived at the Lions View Hospital in New Orleans from Chicago. He is developing an experimental treatment for mental illnesses: lobotomy, considered a rather cutting-edge (pun intended) and effective approach in 1937. Having read about him in the newspaper, Mrs Violet Venable (Hepburn), a wealthy and well known widow, summons the good doctor to her house and presses him into using his surgeon’s skills on her disturbed niece, Cathy (Taylor),  who is currently residing at a private facility for the mentally ill. The board is set for this family drama to unfold, the viewer will slowly discover more details about Violet and Cathy along with the Doc and, naturally, there is a deep, dark secret that will be uncovered at the end. In this character-driven film, deftly directed by Mankiewicz, women have the lion’s share: Hepburn and Taylor are both brilliant and give spellbinding interpretations. Violet makes a very striking entrance, coming down in an open elevator, all wrapped in white and talking fondly about her son Sebastian, the poet. The audience learns about gifted, charming Sebastian who died, suddenly, the previous summer in Spain, while travelling with his cousin Cathy. The latter came back rather “unhinged” and with an amnesia about what exactly happened to Sebastian. She is committed to a facility and basically held there because of her unseemly tales about Sebastian, which Violet finds disquieting. We also detect a simmering anger and jealousy in Violet, since she had an unsound, possessive, co-dependent relationship with her son and she resents and holds Cathy responsible for what occurred. The doctor is caught up between these two strong women and seems a bit lost at times, mostly due to Clift’s portrayal, very subdued and lacking the necessary clout and charisma. The story is moved forward through what it would be considered today an excess of dialogue, which is understandable being an adaptation of a play by Williams, but I think it works very well and it helps in shaping all-round characters. The only complaint about the film could be about not using enough the visual medium as a way to tell the story, although Mankiewicz made some interesting choices for the final monologue that I found very effective. Riveting —7.5/10
Buy it from Amazon:

This post is part of the Great Katharine Hepburn Blogathon hosted by Margaret Perry, read all the other interesting contributions here:

Filed under Oldies but goldies, Seen at home