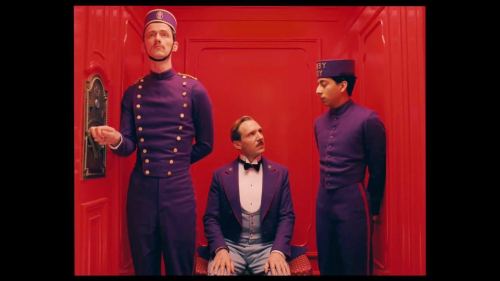 This is the story of Gustave H. (Fiennes), renown and beloved concierge at the legendary Grand Budapest Hotel between the two wars, and Zero (Revolori), who starts as a lobby boy and then become his protégé and most trusted friend. As is Wes Anderson’s wont a voice-over narration begins the tale, in this movie he chooses to built it as story within a story, using an old writer (Wilkinson) who remembers meeting an aging Zero (Abraham) when he was still young (Law). Old Zero will recall his youth and tell his story to the writer. Gustave takes Zero under his wing from the very beginning and start schooling him in the delicate art of running a luxury hotel flawlessly, while he takes care of every need of the guests: Gustave is a full monty concierge, especially with the ladies. This might be considered the root cause of the adventures and mishaps that follows, with a touch of Buster Keaton’s humor. The death of Madame D. (Swinton), a longtime guest at the hotel and dearly attached to Gustave, sets in motion a battle for her very large estate and the possession of a priceless Renaissance painting (bequeathed to Gustave and stolen by him right after the reading of the will, in a genius move). Dmitri (Brody), Madame D’s son, will not stop at nothing to get it all, including murder by proxis, since his faithful henchman Jopling (Dafoe) will do all the dirty work. He manages to frame Gustave for Madame D.’s murder and send him to prison, allowing the audience to be delighted by a cameo by Harvey Keitel, as fellow conscript and means to Gustave’s escape. Zero and his resourceful girlfriend Agatha (Ronan), the pastry apprentice, are essential in helping Gustave to evade, to clear his name and collect what is due to him, but the secret society of the concierges of European luxury hotels will play a key role as well (and we get a Bill Murray’s cameo). By the end, the viewer will finally be able to piece together all the different parts of the story, it does feel like a bittersweet ending after such a roller-coaster of adventures, but it is always the case when one has to part ways with such great characters. We get all the trademarks of Anderson’s style: static camera, artful use of colours and photography, quirky characters and subtle humor. It is one of his best films to date, also helped by an amazing cast: Fiennes above all. Hilarious, amusing and inspired —9/10

2 responses to “The Grand Budapest Hotel”