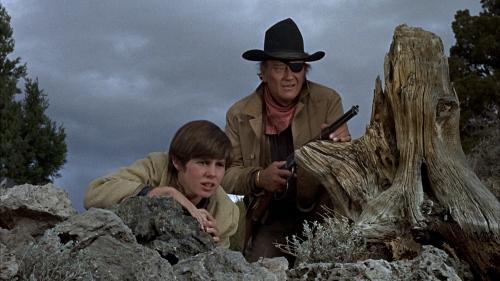 Mattie Ross (Darby) is determined to find her father’s killer, Tom Chaney (Corey), and see that justice is served. Being a resourceful, determined girl, she hires Rooster Cogburn (Wayne), a U.S marshal, who has true grit and a reputation for getting the job done. This unlikely pair is joined by Texas ranger La Boeuf (Campbell), who is chasing the same man for murdering a Texan senator. They start out from Fort Smith, Arkansas, and venture deep into the Indian Territory, where most outlaws seek refuge. A chance encounter with two of Ned Pepper’s (Duvall) men, a notorious bandit, put them on the right track. On a side note, it is interesting to see Denis Hopper in a small supporting role the same year in which Easy Rider was released, another proof of his versatility. The odd trio lie in wait to ambush Ned’s gang, hoping to catch Chaney as well, but luck is not on their side. Rooster’s knowledge of Ned and of the lay of the land will eventually lead them to their quarry but justice will come at a high price. There is a good on-screen chemistry between Darby and Wayne that sells quite well the story, notwithstanding the incredibly wooden performance of Campbell. The portrayal of Rooster is often celebrated as one of the best among Wayne’s roles and rightly so. He manages to complete disappear in his character and bring an artful mix of grumpiness, gumption and good-heartedness. Already in his sixties and rather portly, Wayne channels strength and make this drunken, beaten man believable as a hardened marshal, even if he looks a bit stiff climbing up or down his horse. I must confess that watching American western films from the 50s and 60s always leaves me baffled by the excess of cleanness and neatness of the people and their clothes, I have seen too many spaghetti western and post-western movies not to find it a little weird. I couldn’t help but notice Mattie’s perfectly manicured hands, her nylon stockings or the fact that no one is ever sweaty, scruffy or, god forbid, cover with dust! Anyway it is still a very enjoyable film. Entertaining —7/10

This post is part of the Diamonds & Gold blogathon hosted by Caftan Woman and Wide Screen World, so please have a look at reviews of other great films with memorable performances of actors and actresses into their 50s, 60s, 70s, 80s and beyond:

Filed under Oldies but goldies, Seen at home